“I feel that people think you need to check your brain at the door when you come to know Christ, but I have found that to be quite the opposite,” shares SCS student Erica Rivera. “I would love for people to know that following Christ is also an intellectual pursuit.” 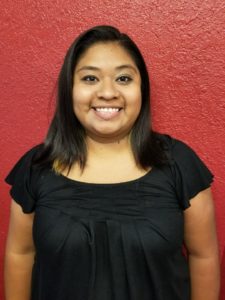 A McAllen native, Erica came to faith at the age of 20. “One Saturday, I got into a huge fight with my older sister and fled to my friend’s house to spend the night. The following Sunday morning she invited me to go to church with her, and I figured the polite thing to do was to go since she let me stay at her house,” she explains. “I walked into a building that looked nothing like a church (it was a warehouse actually), and it was covered in pictures of Superheroes like Batman, Superman and Spiderman. I thought to myself that I had to be in the wrong place because it didn’t look like what I had always thought a church ‘should’ look like.”

Erica soon found out the church was doing a sermon series called “God at the Movies.” On that particular Sunday, the message was on how Jesus is better than Superman. “I remember at the end the pastor extended an invitation, and I raised my hand,” Erica say. “After praying to receive Christ, I was crying uncontrollably, and I could not stop. I was so embarrassed and wanted to leave as fast as I could. I did not go back to that church until two Sundays had passed so no one would remember me crying,” she laughs. “However, I did not know the full weight of my decision until I started attending regularly, and my entire world changed.”

Erica was invited to sign up for her first class by her friend Debra Canchola who serves at the SCS McAllen campus. “My favorite part of going to school at SCS is the caliber of the classes,” she says. “I feel like I learn so much more than just knowing a simple Bible story. There are so many instances where I thought that I knew something or knew some concept and the professor just broke it down to so many more levels than I thought possible.”

“If you are interested in learning more about God, just sign up for one class,” Erica encourages. “Just come on in and try it. People are so scared to jump back into school and don’t feel like they have the time. The reality is we can make time for anything. This is such a great experience and so much is waiting for you, but sometimes we like to stand in our own way.”

Outside of SCS, you can find Erica as the administrative assistant to the Principal at IDEA Public School, reading, crafting, and cheering for the Houston Texans. She also attends BT.Church and serves on the media crew.