Growing up in Gomez Palacio, Durango, Mexico, Dr. Tony Miranda met God early in his life. “I joined the Royal Ambassadors, a mission education organization, as a child and later joined the youth group at my local congregation where my parents also served,” Dr. Miranda tells us. “I continued to learn more about God through retreats, camps, and Congresos.” 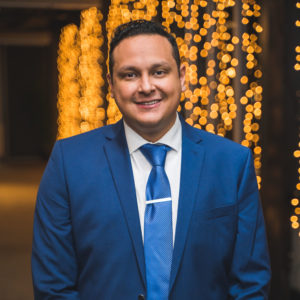 During his adult life, Dr. Miranda received numerous degrees and distinctions. He has his Bachelor in Graphic Design and Marketing and his MBA from Universidad Autónoma de la Laguna. He received his Bachelor of Arts in Biblical/Theological Studies from Baptist University of the Americas and his Certificate of Jewish Culture and Context from the Israel Study Center. As if all of these degrees were not enough, Dr. Miranda also received his Master of Divinity and Doctor of Ministry from George W. Truett Theological Seminary at Baylor University.

However, his thirst for knowledge knows no end as he is now pursuing his Ph.D. in New Testament at Midwestern Baptist Theological Seminary. Dr. Miranda says, “I am particularly interested in the Jewish history and culture of first-century Palestine and the modern state of Israel. My culminating doctoral project addresses the proper interpretation of the teachings of Jesus in the gospels by studying the parables from the Jewish context.”

Just as his academic history is diverse and accomplished, so is his career. From working as a marketing consultant for various firms in Mexico and serving as an adjunct professor with Universidad del Valle de México to working at the Baylor newspaper and being a pastor, youth leader, and worship leader at various congregations in Mexico and Texas, Dr. Miranda has a wide range of skills and interests. Thankfully, Stark College and Seminary is now where Dr. Miranda blesses the students and staff as the Campus Pastor, Director of SCS Programs, and as a lecturer.

At Stark College and Seminary, Dr. Miranda most enjoys teaching Introduction to Christianity and Introduction to Christian Thought. “I see God moving at SCS through the lives of our students. I see their passion and how hungry they to know more about His word and their desire to be better prepared for His service,” says Dr. Miranda. “I hope to help each student fulfill God’s call in their life and prepare and equip them for their service in the local church and community.”

Outside of SCS, Dr. Miranda can be found spending time with his wife Daleth and their daughters Zoe and Noa and pursuing a number of hobbies including reading, recording and producing music, painting, photography, graphic design, and soccer. Make sure you check out what classes Dr. Miranda is teaching next semester, because you do not want to miss the chance to learn from one of SCS’s best and brightest!