“I may not seem like a very nice person, but I’m really not as nice as I seem,” jokes Dr. Doug Jackson, the Director of Logsdon Programming and Assistant Professor of Spiritual Formation. When you first meet Dr. Jackson, his wit and intelligence are matched only by the many desserts he bakes and shares with his students weekly. 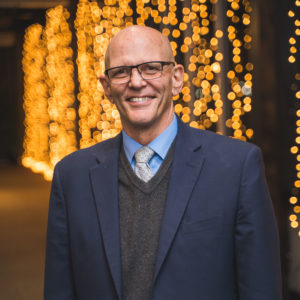 So how did Dr. Jackson make his way to SCS? He previously worked at various churches in Texas and Arizona and served as an adjunct professor at SCS. However, when Logsdon needed a full time director for its Corpus Christi Program, he received the call from our president. “President Celelli decided the position could best be filled by a guy with no research degree and no academic experience,” Dr. Jackson quips.

While Dr. Jackson jokes about the job offer, he answered the call and accepted the position. “I feel called to theological education because in a society that has become largely biblically illiterate, the need for well-trained pastors is greater than ever. Personally, I have never felt God’s pleasure more than when I am teaching, studying, or spending time with students,” Dr. Jackson says. “When I see our graduates serving faithfully and effectively in churches across the state, and even the nation, I know God has given SCS a great gift, and a great responsibility.”

Dr. Jackson teaches multiple classes at our college but is particularly interested in the classical western tradition of spiritual formation, pastoral ministry, and New Testament Greek. Having written articles on all of these topics, Dr. Jackson pursues knowledge and understanding to the highest of levels. A devout fan of the life and writings of C.S. Lewis, Dr. Jackson has also presented papers on Lewis at various venues including the Oxbridge Conference of the C.S. Lewis Foundation. In regards to education, Dr. Jackson holds his Bachelor of Arts in English Literature from Grand Canyon College, his Master of Divinity from Southwestern Baptist Seminary, and his Doctor of Ministry from Truett Seminary.

Outside of Logsdon and SCS, you can find Dr. Jackson spending time with his wife, Dr. Becky Jackson, or using puns on unsuspecting bystanders. Next semester he is teaching a class on Racial Reconciliation and multiple courses at the graduate level. Make sure to schedule an appointment with your advisor today so you can take a class with Dr. Jackson!