A Summer Serving the Community

If you asked me what kind of effect nearly three hundred teenagers would have on a single, unsuspecting Texas town, I would probably have predicted chaos. However, when those three hundred teenagers are driven by a shared love for God and a desire to demonstrate this love for their neighbors, the effect is eighty projects completed. This summer, with MPact Missions, this group brightened up the homes, nonprofit organizations, and schools in Hondo, Texas. 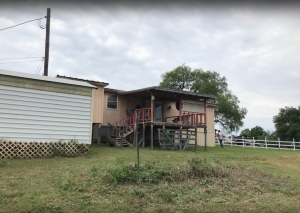 This was my second year to go on the MPact Missions trip with First Baptist Church, Sinton, and I was just as amazed at seeing what these teenagers accomplished as I was last year. I was on a work team with a youth pastor from the Denton area, and we had a team of thirteen youth. Our first project was supposed to take us all three work days to complete. It included power washing a house, painting a garage, mowing a large yard, doing a large amount of weed eating, digging post holes, and more. These kids finished it in one day. The rest of our projects consisted primarily of yard work, and I was proud to see one of the girls from FBC Sinton wielding a weed eater with ferocious competence on nearly every project.

My favorite part about these projects was meeting the people who we were helping. One of them was a man who just had back surgery and was unable to clear the large, overgrown brush pile in his backyard. Another was an elderly woman who lived with her bedridden sister and was unable to keep up with her yard. We also trimmed hedges, spread mulch, and cleared debris from flowerbeds at a children’s advocacy center. It was remarkable to see these teenagers being the hands and feet of Jesus to these people and to see the faces of those we served light up with the love of God. Overall, my team completed five projects in the three workdays of MPact. 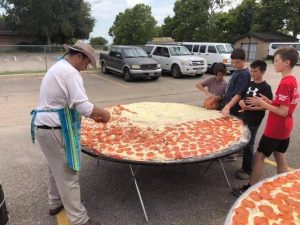 Every evening once we completed our work, we ate dinner in the cafeteria of one of the schools hosting us and then headed to communal worship. The theme this year was “Made for This,” and every night we got to hear of the different things God created us for such as community, change, and a relationship with God. The final night of worship, after we had spent a well-earned fun day at Fiesta Texas, the Holy Spirit moved almost tangibly through the gathered worshippers, and youth and adults alike responded by the dozens to God’s presence.

Overall, the group of 289 youth came from 19 churches and completed 80 projects in the city of Hondo, Texas. Most of these projects directly benefited families who were unable to complete the work themselves, and the others were for nonprofit organizations, local churches, and the public schools. The lasting impact on the community is hard to measure, but I hope and trust that God will use the work of MPact Missions in the community as an example to spur other residents of Hondo, Texas to love and serve their neighbors in the name of God.

Written By: Professor Krissy Nichols. Professor Nichols is the SCS librarian and teaches Theological Research and Writing. She is a member of First Baptist Church Sinton.