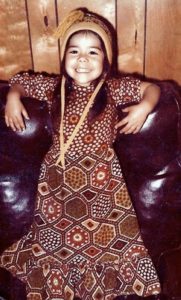 I grew up in a small town of 12,000 people that was predominantly Hispanic. I am a third generation Hispanic-American whose parents were migrant workers. My mom has a 7th grade education and never finished high school because she stayed home to help with younger siblings. My dad joined the Army right after high school and served in combat during the Vietnam War. My parents have no college education but are hard workers. They always believed in me and my three younger siblings and were supportive of our endeavors. However, the greatest encouragement they gave us was a relationship with Jesus.

When I graduated high school, I remember several friends “going off to college,” but I knew my parents could not afford that, so I decided to go to our local community college. While I was a good student, I had no clue what I was doing degree wise and switched majors after a year. Soon after that, I started working and kept going a few semesters to night school but became discouraged and eventually quit. I had attained 58 hours of college credit in two different fields with no degree. Life got busier, and my college dream faded.

Twenty years later, God used some speaking opportunities to lead me back to higher education. This time it was different. I had a clear focus of my passion and purpose, which was Jesus and ministry! Stark College & Seminary became my path to growing in God’s call on my life. Even though my plate was full as a wife, a mother, a full-time employee, and a minister, these were not impediments to my education. Instead, they were the inspiration that propelled me forward. There were days when I was completely overwhelmed and exhausted, but thanks to God’s enabling grace, the wonderful support of my husband, and the assurance of my SCS family, I was able to persevere and finish each semester with all A’s.

I started in the undergrad program in 2010 but kept going and graduated with my Master’s in Family Ministry in 2016. I strove to be an example to my sons and to all of my Latina sisters that it’s never too late to pursue your college dream, especially if it’s in obedience to God’s calling. Whatever steps the Lord ordains us to make, He will empower us to take them. These steps of faith often lead to higher stairs than we thought possible! Now equipped with a theological education, in 2019 I launched Healthy Family Roots Ministries where my ministry mission is to help families have healthy relationships rooted in Christ for the glory of God. I also actively serve in my home church, Corpus Christi Christian Fellowship, and as an adjunct professor at SCS. None of these would have been possible without my education from SCS. 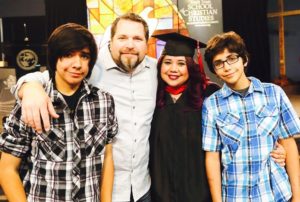 I am truly grateful to Stark College & Seminary for being a part of my non-traditional journey, not only to a degree, but to a life changing education. Because of SCS, I am a better wife, mother, speaker, teacher, leader, and follower of Christ. On top of that, I am now a part of less than four percent of Latinas who have a graduate degree. My prayer is that more of my hermanas will join me in achieving their college dreams at SCS. Si se puede!

This article was written by Rochelle Rocha Roots. She is the executive assistant to the president at SCS and is the founder of Healthy Family Roots Ministries. She organizes and speaks at different Christian conferences throughout the year.